In the old days it was socially correct for one to help guests or fellow diners first when a dish was served, especially if you were playing host in the table. Some would do so throughout the course of the meal. Fellow diners would also usually reciprocate. All these were supposed to be traits of good upbringing. Using your own pair of chopsticks to serve others was also not a big issue, even though they had been coated with your saliva many times over!


But friends, this is NO-NO in the present time, unless the person you want to help is a lady, or an elderly, or a young child! Even then, please DO NOT use your chopsticks, or fork, or spoon. Ask the restaurant helper for a common pair of chopsticks or a fork or a spoon if none is provided. It is still quite common to see Chinese eateries and restaurants the world over to overlook this need even today. (Yet we say we are the most cultured people on this planet!)


First of all, many people are quite health conscious or discerning about their food now. What is nice to you may not be great to your guests or fellow dinners. Second, you spoil people’s appetite with your “peasant” habit of wielding chopsticks left, right and centre.


Another peasant habit one commonly sees is this: dumping the bones and fats on the table. Thoughtful restaurants usually provide a small plate beside the main plate/bowl for the purpose. But if it is not available, do leave them at one corner of your plate. When you are done with the meal, don’t leave your chopsticks and cutlery all over the world. Place them neatly together - parallel to one another - on your plate.


Many of us Chinese still have a great deal to lean about table etiquette!
Posted by Yu-Book LIM at 5:07 PM No comments:

On our way out of the Monastery of Divine Madman in Wandue, Bhutan, my wife and I saw this young lady. “Where are you from, sir?” “Japan?” She asked in perfect English. I can understand why she thought we were Japanese. After all, how many tourists of Chinese descent ever bother to say hello to strangers?

I was intrigued by the cross she wore on her neck. She told us that her parents were Christians and there is also a church there. But didn’t our tour guide tell us that there was no church in Bhutan? Before we parted, she even said, “Have a good day!” How sweet of her! She is only 10 years old!


I was trying to bring home a point by relating this incident to friends. Bhutan was hardly a nation a couple of hundred years ago. Today its people practise a level of social etiquette much higher than ours.


I was also not very conscious about common courtesy until I decided to call Australia home in 2001. My wife and I took morning and evening walks around our apartment at Sydney’s Rushcutters Bay. We were always greeted by whoever we saw along the way. On roads, few would overtake you left, right and centre. Everyone seemed to be observing speed limit. And no random parking!  I began to realize how oblivious and inconsiderate we could be to fellow beings in our part of the world! And we boast about our five thousand years of civilization!


Even though the dwellings of their common folks are pretty simple, Bhutanese are a clean lot. Their grounds are neat and tidy. The same holds true for their public places and monasteries. I particularly appreciate their restaurants. The cutlery is thoughtfully laid out; there is always a common spoon for dishes that are meant to be shared. The food, though Spartan, was generally tasty. And the best of all, the toilets are clean and not smelly!

There is a great deal we Chinese have to learn from Bhutanese!!!

The Kathmandu I visited in 1974 - a city thinly populated, without much traffic, dissected by clean rivers and guarded by the majestic Himalayas - is long gone. Today it is a city of some 4 million inhabitants. Traffic is chaotic, air dusty and garbage piles up everywhere. Fortunately, the people are still as friendly as before. But from the way they speak English, they sound not very different from their southern neighbours now.

My wife and I did a cursory tour of the country that counts on Gross National Happiness to measure its people's well-being than anything else and we came back thoroughly impressed, not just by the looks of their superstar royal couple, but by what we saw. The whole country is pristine - lush forested mountains and blue-water rivers everywhere. Their architecture is distinctive - from humble dwellings to majestic fortresses and monasteries. But what we enjoyed most was their people - so ready to break into smiles and help. They must have the highest per-capita English proficiency outside the English-speaking world - thanks to their very enlightened monarch. Apparently, every subject in school in taught in English, except their Dzongkha language and culture. They speak English without any heavy trace of South Asian accent. Even though the meals that were organized for us by the local tour organiser were quite simple, they tasted good. Their national dress, which Bhutanese wear on all social occasions, make them look like samurais (maybe more elegantly so - with their black high stockings).

Some tourists might find their roads "third-world" but I was quite prepared to overlook this discomfort. After all, it is a land-locked country with a population of only about 700,000. Everything has to be imported!
﻿﻿﻿﻿ 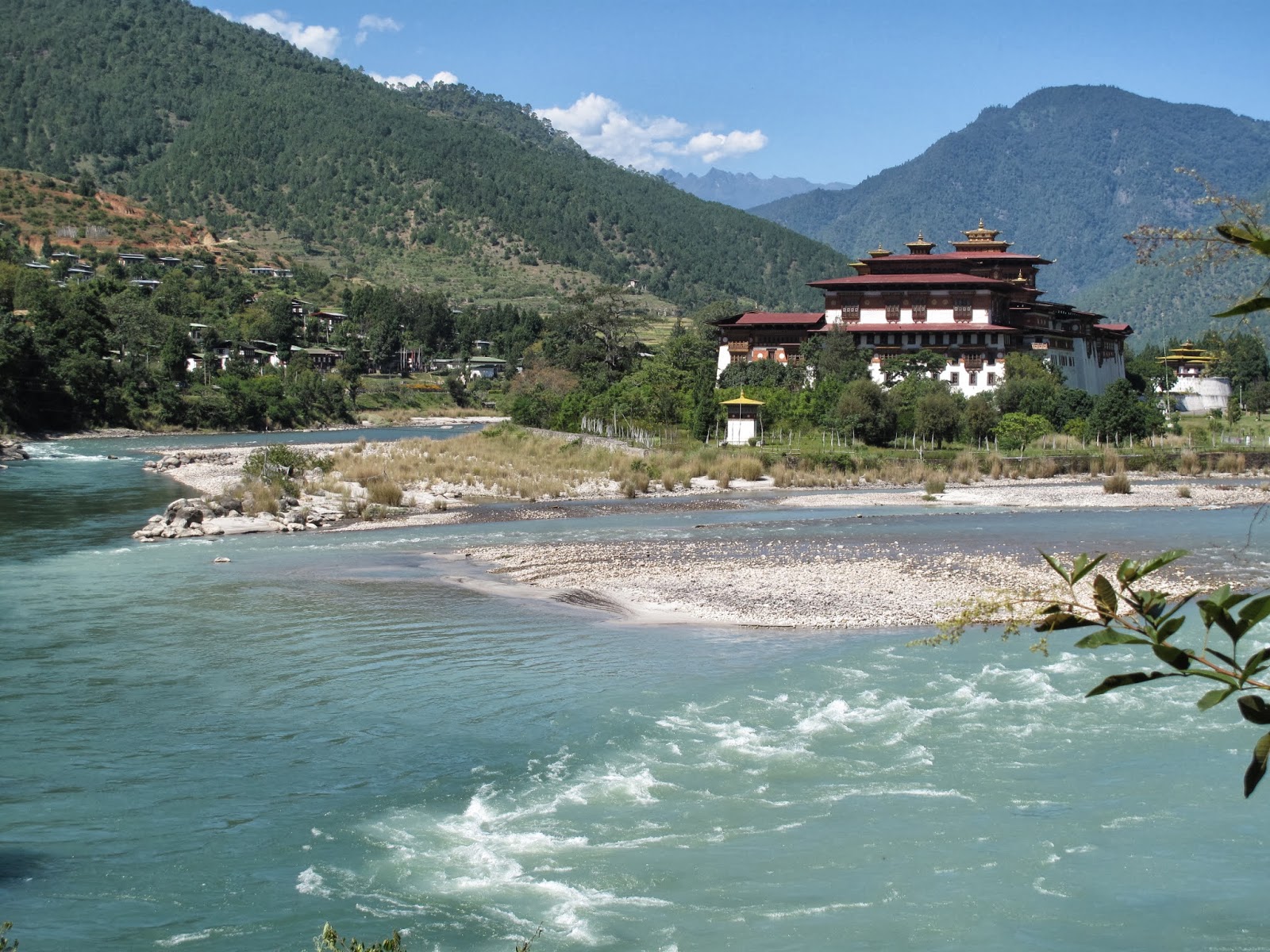