The park comprising some 4,300 sq.km straddles three states - Pahang, Trengganu and Kelantan. Although most restrictions under Malaysia’s Movement Control Order – as a result of the outbreak of Covid-19 – have been lifted, we are still not allowed to cross borders without having to ensure cumbersome embarkation and arrival procedures, not to mention the risk and discomfort of air travel under the circumstances.

But we are all itching to get out of the house!

My wife and I decided to do a loop of the East Coast states. We would visit Taman Negara via Jerantut, after that, we would drive north to Kota Bahru, spend a night or two there, before turning south to visit Lake Kenyir, and depending on what we see of the conditions in the hotels there, do a day tour or stay a night, and after that, hit the road again to return via Kuala Trengganu and Kuantan, with maybe a night at one of the resorts in between.

That was the plan; unfortunately, it didn’t work out.

The Kuala Lumpur to Kuala Tahan leg was easy, even though some stretches nearer Kuala Tahan are narrow and logging trucks were quite menacing. The signage for Mutiara Taman Negara was quite poor. It was not until we hit the jetty that a hotel employee came in a motorcycle to welcome us.

“Where is the car park?”

“You have to park your car up there,” he pointed his fingers towards the top of the slope.

It is quite a distance away and the slope as too steep for a handicapped person like me to handle. He was kind enough to offer his help. After depositing our stuff at the jetty, I followed him in my car to the parking ground. The fee was RM30 for two days, which entitled me to park under a roof. After that, I hitched a ride on his motorcycle back to the jetty. All well and good.

The ferry to the hotel costs only RM1 each. With the loss of tourist numbers, life must be tough for these boatmen. 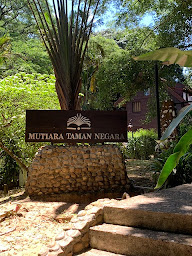 Mutiara Taman Negara is supposed the “best” hotel at Kuala Tahan. I was told that it is now owned by Syed Mokhtar Albukhary. The ground is sprawling, and the chalets look decent enough, but I couldn’t help concluding that the resort must have seen better days before.

The resort organises a couple of activities for guests to choose. We opted for two – (a) a visit to the Orang Asli settlement along the Tembeling river and (b) a visit to the canopy walkway, which entails about three hours of jungle trekking.

I won’t say they were really worth our efforts. I am sure the Wildlife Department can do a better job. I am not saying they should do more to commercialise. Maintenance is an issue, and little is done to impart knowledge and awareness to visitors. 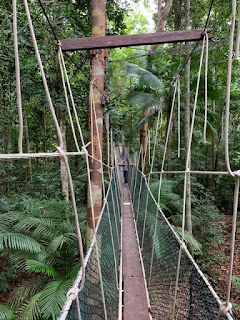 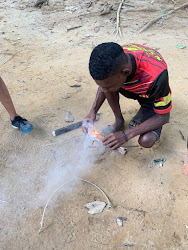 The second evening, soon after our dinner.

I saw my wife rushing to the toilet.

The whole evening was a nightmare – she was in and out of the toilet, vomiting and purging. We had forgotten to bring any food poisoning medicine along! And there was medical help in the resort.

We checked out when dawn broke. She was so drained out that nothing could come out anymore. Fortunately, she could ensure the 4-hour return journey.  It must be a terrible time for her.

The food offered by Mutiara was pretty tasty. But each time we had to fight with a couple of flies who were so persistent in landing on our dishes. We thought this was just inevitable. We didn’t expect trouble. But on reflecting, there are all sorts of poos dropped by elephants, wild boars, monkey, etc in that jungle. What do you expect?