And on top of that, you can also forget Michael Porter, Henry Mintzberg, W Chan Kim, not to mention Rosabeth Kanter, Tom Peters and a couple of others.

You can dispense with Niccolo Machiavelli and Sun-tze’s writings as well.

Jack Ma is indeed a phenomenon. For someone who was not educated in English, he delivers his talks in English so confidently!

I have watched a number of his talks. You cannot help being impressed or mesmerized. The messages are inspirational – you can make things happened if you really want to do it – the “Just like me!” type of evangelism.

But as you see more and more of it, you start to discern a pattern in his speeches. He shocks you into agreeing to his form of non-conventional wisdom. Of course, he has tons of examples to back up his contentions.

His Alipay has taken China by storm; even Lee Hsien Loong is impressed. I am seeing this App in Singapore’s taxis now. I thought I should also keep up with the kneah-sus in Singapore and therefore accessed Apple Store to down the App. I couldn’t go beyond the first few instructions, even though I have some working knowledge of Chinese. It is still very China- or Chinese-centric. I am just curious; for a man of Jack Ma’s global reach and ambition, how can the App be so “cheeeena”?

Jack Ma always claims that he applied to Harvard four times and was rejected every time. Of course, he is trying to tell you that you don’t need a Harvard MBA to make good. Maybe if he had been accepted by Harvard, he would already have become the emperor of the global business world by now?

I have always a nagging doubt about his “joke” about the Harvard part. If you want to go to Harvard, besides a good degree, you also need to sit for GMAT and score well. Usually there is no difficulty for many to do well in the quantitative parts, but to score well in the qualitative parts, where a high degree of proficiency in English is called for, that’s an extremely tall order for those whose principal education is not in English. Did he actually apply to go to Harvard?

I used to know a Dr Yap XXX. He claimed he had a PhD in Chemical Engineering from Manchester and an MBA from Strathclyde (or was it the other way around?). Every colleague took it as a matter of fact. Later, it dawned upon me that he had never used IRR or NPV in financial evaluations. And in another occasion, I found him totally muted when the subject of corrosion was brought up for discussion amongst colleagues. How can a PhD in Chemical Engineering not know something about corrosion? Obviously, he degrees cannot be real, can they? Don’t tell me standards in British universities are so bad!
Posted by Yu-Book LIM at 11:05 AM 1 comment:

Who wants to be the first one to boooooo?

I am copying the following from Homo Deus: A Brief History of Tomorrow (Harari, Yuval Noah; Random House to share with you…

On 21 December 1989 Nicolae Ceauşescu, the communist dictator of Romania, organised a mass demonstration of support in the centre of Bucharest. Over the previous months the Soviet Union had withdrawn its support from the eastern European communist regimes, the Berlin Wall had fallen, and revolutions had swept Poland, East Germany, Hungary, Bulgaria and Czechoslovakia. Ceauşescu, who had ruled Romania since 1965, believed he could withstand the tsunami, even though riots against his rule had erupted in the Romanian city of Timişoara on 17 December. As one of his counter-measures, Ceauşescu arranged a massive rally in Bucharest to prove to Romanians and the rest of the world that the majority of the populace still loved him – or at least feared him. The creaking party apparatus mobilised 80,000 people to fill the city’s central square, and citizens throughout Romania were instructed to stop all their activities and tune in on their radios and televisions. To the cheering of the seemingly enthusiastic crowd, Ceauşescu mounted the balcony overlooking the square, as he had done scores of times in previous decades. Flanked by his wife Elena, leading party officials and a bevy of bodyguards, Ceauşescu began delivering one of his trademark dreary speeches. For eight minutes he praised the glories of Romanian socialism, looking very pleased with himself as the crowd clapped mechanically. And then something went wrong. You can see it for yourself on You-Tube. Just search for ‘Ceauşescu’s last speech’, and watch history in action. The YouTube clip shows Ceauşescu starting another long sentence, saying, ‘I want to thank the initiators and organisers of this great event in Bucharest, considering it as a—’, and then he falls silent, his eyes open wide, and he freezes in disbelief. He never finished the sentence. You can see in that split second how an entire world collapses. Somebody in the audience booed. People still argue today who was the first person who dared to boo. And then another person booed, and another, and another, and within a few seconds the masses began whistling, shouting abuse and calling out ‘Ti-mi-şoa-ra! Ti-mi-şoa-ra!’ 18. The moment a world collapses: a stunned Ceauşescu cannot believe his eyes and ears.

All this happened live on Romanian television, as three-quarters of the populace sat glued to the screens, their hearts throbbing wildly. The notorious secret police – the Securitate – immediately ordered the broadcast to be stopped, but the television crews disobeyed. The cameraman pointed the camera towards the sky so that viewers couldn’t see the panic among the party leaders on the balcony, but the soundman kept recording, and the technicians continued the transmission. The whole of Romania heard the crowd booing, while Ceauşescu yelled, ‘Hello! Hello! Hello!’ as if the problem was with the microphone. His wife Elena began scolding the audience, ‘Be quiet! Be quiet!’ until Ceauşescu turned and yelled at her – still live on television – ‘You be quiet!’ Ceauşescu then appealed to the excited crowds in the square, imploring them, ‘Comrades! Comrades! Be quiet, comrades!’ But the comrades were unwilling to be quiet. Communist Romania crumbled when 80,000 people in the Bucharest central
square realised they were much stronger than the old man in the fur hat on the balcony. What is truly astounding, however, is not the moment the system collapsed, but the fact that it managed to survive for decades. Why are revolutions so rare? Why do the masses sometimes clap and cheer for centuries on end, doing everything the man on the balcony commands them, even though they could in theory charge forward at any moment and tear him to pieces? Ceauşescu and his cronies dominated 20 million Romanians for four decades because they ensured three vital conditions. First, they placed loyal communist apparatchiks in control of all networks of cooperation, such as the army, trade unions and even sports associations. Second, they prevented the creation of any rival organisations – whether political, economic or social – which might serve as a basis for anti-communist cooperation. Third, they relied on the support of sister communist parties in the Soviet Union and eastern Europe.

Despite occasional tensions, these parties helped each other in times of need, or at least guaranteed that no outsider poked his nose into the socialist paradise. Under such conditions, despite all the hardship and suffering inflicted on them by the ruling elite, the 20 million Romanians were unable to organise any effective opposition. Ceauşescu fell from power only once all three conditions no longer held. In the late 1980s the Soviet Union withdrew its protection and the communist regimes began falling like dominoes. By December 1989 Ceauşescu could not expect any outside assistance. Just the opposite – revolutions in nearby countries gave heart to the local opposition. The Communist Party itself began splitting into rival camps. The moderates wished to rid themselves of Ceauşescu and initiate reforms before it was too late. By organising the Bucharest demonstration and broadcasting it live on television, Ceauşescu himself provided the revolutionaries with the perfect opportunity to discover their power and rally against him. What quicker way to spread a revolution than by showing it on TV? Yet when power slipped from the hands of the clumsy organiser on the balcony, it did not pass to the masses in the square. Though numerous and enthusiastic, the crowds did not know how to organise themselves. Hence just as in Russia in 1917, power passed to a small group of political players whose only asset was good organisation. The Romanian Revolution was hijacked by the self-proclaimed National Salvation Front, which was in fact a smokescreen for the moderate wing of the Communist Party. The Front had no real ties to the demonstrating crowds. It was manned by mid-ranking party officials, and led by Ion Iliescu, a former member of the Communist Party’s central committee and one-time head of the propaganda department. Iliescu and his comrades in the National Salvation Front reinvented themselves as democratic politicians, proclaimed to any available microphone
that they were the leaders of the revolution, and then used their long experience and network of cronies to take control of the country and pocket its resources. In communist Romania almost everything was owned by the state. Democratic Romania quickly privatised its assets, selling them at bargain prices to the ex-communists, who alone grasped what was happening and collaborated to feather each other’s nests. Government companies that controlled national infrastructure and natural resources were sold to former communist officials at end-of-season prices while the party’s foot soldiers bought houses and apartments for pennies. Ion Iliescu was elected president of Romania, while his colleagues became ministers, parliament members, bank directors and multimillionaires. The new Romanian elite that controls the country to this day is composed mostly of former communists and their families. The masses who risked their necks in Timişoara and Bucharest settled for scraps, because they did not know how to cooperate and how to create an efficient organisation to look after their own interests. 21 A similar fate befell the Egyptian Revolution of 2011. What television did in 1989, Facebook and Twitter did in 2011. The new media helped the masses coordinate their activities, so that thousands of people flooded the streets and squares at the right moment and toppled the Mubarak regime. However, it is one thing to bring 100,000 people to Tahrir Square, and quite another to get a grip on the political machinery, shake the right hands in the right back rooms and run a country effectively. Consequently, when Mubarak stepped down the demonstrators could not fill the vacuum. Egypt had only two institutions sufficiently organised to rule the country: the army and the Muslim Brotherhood. Hence the revolution was hijacked first by the Brotherhood, and eventually by the army. The Romanian ex-communists and the Egyptian generals were not more intelligent or nimble-fingered than either the old dictators or the demonstrators in Bucharest and Cairo. Their advantage lay in flexible cooperation. They cooperated better than the crowds, and they were willing to show far more flexibility than the hidebound Ceauşescu and Mubarak.

University Colleges - Universities of the future?

University colleges are not new. There are many in the United States, but they tend to be elitist schools. There is also one in Singapore - Yale-NUS College. It has just graduated its first batch and already reached its optimum enrollment target.

I was thoroughly impressed!

They basically teach Liberal Arts and Sciences. Classes are small, about 20 in size. (Total enrollment a year is only about 200.) The concept is learning with teachers, rather than being taught by teachers. Teachers appear to be a passionate lot; they instill creativity and curiosity. They become "thinkers" - culturally and intellectually. Such immersion will stand them in good stead even if they choose to pursue something more solid later.

And unlike their American counterparts, they are not expensive, relatively speaking, of course.

Do consider this alternative for your children! 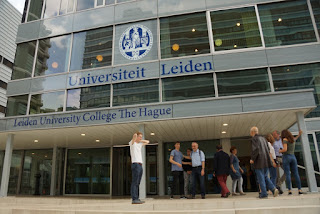