I had never heard of this traditional Chinese medicine until I had my August 2016 accident.

A very caring friend rushed it to me when I was undergoing intensive observation after a flab attachment surgery. I was told that it was good for recovery after a surgery. I took a look at it and decided to put it aside – what exactly it was meant for was not clear; the dosage instruction was particularly not reassuring. There are eight capsules in one box, which presumably contained 3gm of the medicine. An adult is supposed to take 6 gm each time. How does the Math work? How many capsules should I take each time? 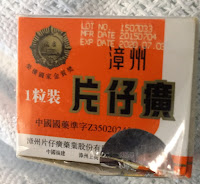 Some months ago, Prof Hong Hai, who was the CEO of Har Par, told me that his company had wanted to acquire the rights to make and market – like what they do for Tiger Balm – but the offer was turned down. The Chinese consider it guo-bao (national treasure) and was therefore not for sale.

But I didn’t know this bit of the medicine’s reputation that time.

The bad news was finally conveyed to me; the Singapore surgeon had to remove the flab. The sight was most ugly. The orthopedic surgeon suggested that I consider having my left foot amputated. He even introduced someone with a prosthetic leg to show me how he could live with it without disrupting routines. I was all ready for the amputation…

My son and daughter were all against it. That had to be the last resort, they insisted.

I showed a senior surgeon there about this Pientzehuang. He saw no harm in my trying it.

What’s there to lose, I told my wife. I started the course without hesitation.

I could feel some strange sensation coming from the heel-ankle area soon after taking the capsules. The mess began to granulate and soon a membrane was formed over it.

The rest is history.

I finally decided to have my damaged left foot fixed by a surgeon in Melbourne.

Soon after a reckless cab driver mowed me down while my wife and I were having our usual morning walk around Singapore’s Scotts-Cairnhill area on a Sunday about two-and-a-half years ago, an ambulance rushed me to a public hospital in Singapore, since we did not carry any identification at all. The injured part was promptly dressed up, but I was not wheeled into the operating theatre until very late that evening. When the doctors opened it up again a couple of days later, infection had already set in. Part of the heel pad had to be scrapped off. I had to undergo a flab replacement surgery. But to my great disappointment, the graft failed, and it appeared that my left leg might have to be amputated.

Earlier a caring friend rushed me some Chinese medicine to take after the surgery. But the instruction was so mickey-mousy that we decided to put it aside, in order not to jeopardize the surgery. What’s there to lose anymore? I promptly took it.

Believe it or not, the medicine worked! It is Zhangzhou’s Pientzehuang. The injured part began to granulate and soon a membrane was formed. I could walk, even though the half of the heel pad that was supposed to cushion my foot when walking was already gone.

On the suggestion of some surgeons in Singapore, I consulted Prof Wayne Morrison of St Vincent Melbourne. He thought I should undergo another flab surgery, lest there would be ulcerations from time to time at the affected area.

I was also given the opportunity to consult several senior hand surgeons in Melbourne and Singapore. Some thought I could do without one; others said it might be good.

But ulceration became more frequent; this gave my wife a great deal of unhappiness. I dread another one, since the first was quite a harrowing experience in the first place. Notwithstanding, I decided to go through another one under Prof Morrison.

Prof Morrison is perhaps 75. He looks like actor Peter O’Toole.

He works like a clock – I had only to check in at the hospital at seen; by eight I was already at the operating theatre. I was awakened at noon. The operation was already over! Exactly one week later, I was discharged.

Being a student of management, I love to observe how organisations go about their work.

First the good surgeon. He is a man of few words; but he is cool and exact. The stitches on the grafted flab look the work of a Gucci expert. I noticed that there were not too many people in the operating theatre. When there was a small hiccup four days after the surgery; he knew exactly what to correct. I see that his medical technique is not very different from what I experienced in Singapore, but his skill level is certainly many notches higher. And the post-surgery attention was also quite different – no lamp needed to warm up the affected part; all the nurses had to do was to make sure that could continue to hear pulses from the grated flab. They came in waves; which was music to me and the nurses.

The standard of hospital care between my Singapore stay and St Vincent Private were more or less the same. The older nurses in Melbourne are more sure-footed, though. Passing motion in bed was the most nightmarish chore in both stays!

It will take a couple more weeks before I can go back to my routines. I am glad it is over.

And thank you, Prof Wayne Morrison!