我爱发明 (I love to invent!)

I asked my good friend Rocky Wong, who is an expert in power plants, why was that Chinese plants were so badly reviewed each time they were commissioned. I was alluding to a recent article I read in a pretty well-regarded magazine about the one China had built near Jakarta. (I took more than a casual interest in its development for a reason: I used to a director of the Malaysian arm of this Chinese manufacturer, which is the public listed Dongfeng Electric based in Chengdu, China. The company was trying to bid for an IPP project in the 1990s, but the pursuit came to nothing, thanks to the 1997 Asian Financial Crisis.) Apparently, the Indonesians are fed up with the whole project. Rocky has designed, or been involved in the preparation of, some of the biggest IPP (Independent Power Producer) projects in the region. He used to speak well of China’s power plant technology.

He gave out a hearty laugh. “It’s simple really,” he said, “the Chinese are indeed good in those 300MW or so plants; they can churn them out like sausages. They will work well in China, but not outside China.”

He continued, “While their plants are good, their basic instrumentation is really second-world. This stuff of theirs is crude. And their operating instructions – they are really a joke.”

“To make the plant work well, one must be able to help prepare he local parties for these two basic needs. As a consultant, I helped them source modern, but appropriate, instrumentation and translate all the operating manuals into good English or the local language, as the case may be, not the Mickey Mouse English we so often see in Chinese product brochures.”

Rocky is so spot on!

These power plants cost hundreds of millions – in whatever good hard currency terms – yet these Chinese manufacturers can compromise on basic instrumentation and are oblivious to the need of good English to sell their wares!

Rocky’s wisdom reminds me of a visit I made to the Three Gorges Dam some years ago. The engineering was indeed impressive, until you visit the control room. The façade is so third-world in terms of housekeeping. The walls and doors are rusting away in so many places! Yet this is the showpiece of the day in China those days! 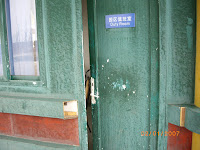 Didn’t I hear that the “ultra-modern” trains that are being sold to Malaysia are still struggling to get the necessary certification to commence operation? How can this be, when these China’s Prides are already crisscrossing the country for years?

In a social occasion, an acquaintance in Sydney confided to me that his daughter was suffering from a rare disease that inflicts endless, excruciating pains to her limbs. Apparently, her only remaining useful arm is also failing. She has seen all the top medical professors and specialists in Sydney; none seemed to be able to help. I suggested that alternative medicines might help. He said he was prepared to be open-minded; however, the very mention of traditional Chinese medicine dampens any enthusiasm from him. As an intellect, he is too discerning to believe all the panaceas offered in traditional Chinese medicine, especially with the English that is written on the labels and the instruction sheet inside?

Wisdom is a rare commodity, even with Confucian Chinese!

I tune in to CCTV’s 我爱发明 (I love to invent) programme from time to time. You can see Chinese love of inventiveness. But the way some of them went about it was really silly. Much of the process was done in a trial and error manner, totally devoid of scientific understanding. And the crudeness behind their engineering is shocking, worse than the workshops you see in the Chan Sow Lin area in the 1970s!

Despite what we saw in those mighty armoury and other military displays in the parade to commemorate its victory in the war against Japan, we really have to hold back our pride somewhat. Unless Chinese can come to grips with the finer points of engineering, everything will remain NICE FROM FAR, BUT FAR FROM NICE.

I am a basher (if there is such a word) of many things Chinese, not because I am banana, but because I think we need to get our ABCs right.

Who are really the shallow ones?

The organisers of Bersih 4 have been labelled as "shallow" by some of those who want everybody to believe everything is well and good in Malaysia now.

I suppose they mean these activists are shallow in terms of intellect, or attitude, or knowledge, or patriotism, or the likes. Who are really shallow, the Bersih 4 organisers or these critics? I think all of us know the answer; there is therefore no point in my labouring over the matter.

However, this type of sweeping accusation does remind me of an incident I encountered some years ago while I was prospecting for land in Indonesia for large scale cultivation of oil palms for the IMC group. One of the provinces I was working on was East Kalimantan; its capital is Sararinda. I usually put up in Bumi Senyiur, hitherto the the top hotel there. One day, I saw that a mainland Chinese was having difficulty in trying to make himself understood to the reception, thanks to his Mickey-Mouse English! (Of course he couldn't speak a word of Indonesian.) I asked him in Mandarin what was his problem and offered my help.

He was asking for a discount!

I explained to him that such a hotel would not offer discounts in the manner he wanted. I remember because the rate was rate was quite stiff, he decided to try somewhere else. My local manager Alay Yuanda was kind enough to help him find a hotel nearby that suited his budget.

Alay became a trusted friend of xiao-Yang, which he wanted to be called. He also bought me dinner one evening. Xiao-Yang hails from Wuhan and was trying to buy coal from Kalimantan to ship to China. He became so successful that soon he opened up mines! He even married a local woman; of course he had to become a Muslim. I believed he was already married in China, though.

Xiao-Yang remarked to me one day that although I spoke fluent English, the type of English I spoke was actually less that biao-jun (标准 or 標準), or not up to "standard".

Whose standard??? He said his was the standard! How ironical!!! Or funny? Ignorance is bliss I suppose? And to the half-baked politicians I mentioned earlier, where everybody is shallow to them, I suppose stupidity is bliss???

If you do not attempt to see beyond the tip of your nose, you just cannot learn. Try turn on CCTV to listen to news in English; I bet you get irritated by the English spoken by their homegrown presenters. They speak English like the way they speak Mandarin! Don't blame them, though. They simply would not know that their English is bad. I suppose their teachers also taught them to speak English that way in schools and universities! And their teachers had also been taught that way by their teachers! The process thus becomes self-perpetuating (or incestuous?).And Chinglish is born!

I was watching CCTV' English Channel's live coverage on the 70th anniversary of China's victory against Japan the other day. The parade was certainly impressive. But before the anchors took over, it was covered by a number of local reporters. Again, I couldn't help remarking to my wife that Chinese are so very good in shooting themselves in the foot. The channel is meant for international audience, but which part of international audience would tune in to watch this parade - with the English they can hardly bear to listen???

What Al Jazeera does is different. Poach the best from BBC or CNN or CNBC; in no time you are as authoritative as these channels.

If you are too self-centred, you will never know what has slipped past you!!!