Romania and Bulgaria, two of our first tour destinations of the Balkans, have a number of things in common. They were both under the suzerainty of Ottoman before the two world wars. Both aligned themselves with the Nazis in the second. After that they became members of the Warsaw Pact, until the breakup of the Soviet Union. Both are now members of the European Union.


I was hoping to be greeted by Roma, or the gypsies, when we arrived in Bucharest, the capital of the former. We have heard so much about these Indo-Europeans and all of us were told to be extra careful with our wallets. To my disappointment, we did not get to see any, except for a small village from afar during our coach journey across Bulgaria. Apparently, only some 3% and 5% of Romanians and Bulgarians, respectively, are gypsies.
Romania was notorious for its dictator Nicolae Ceausescu during the Cold War. He and his wife were eventually executed.

The local tour guide claims that the building in the picture below is the second biggest in the world – after the Pentagon. He may well be right, but I really do not see the basis of the claim.


Even though Bulgaria was a member of the Axis, Tsar Boris III, the reigning monarch was said to have declined to participate in the deportation of Jews to concentration camps. His sudden death in the summer of 1943 is believed to be the work of the Nazis. Today, he is a saint to Bulgarians.


The following is a picture I captured in Sofia, the capital of Bulgaria. Why the capsule at the road junctions? 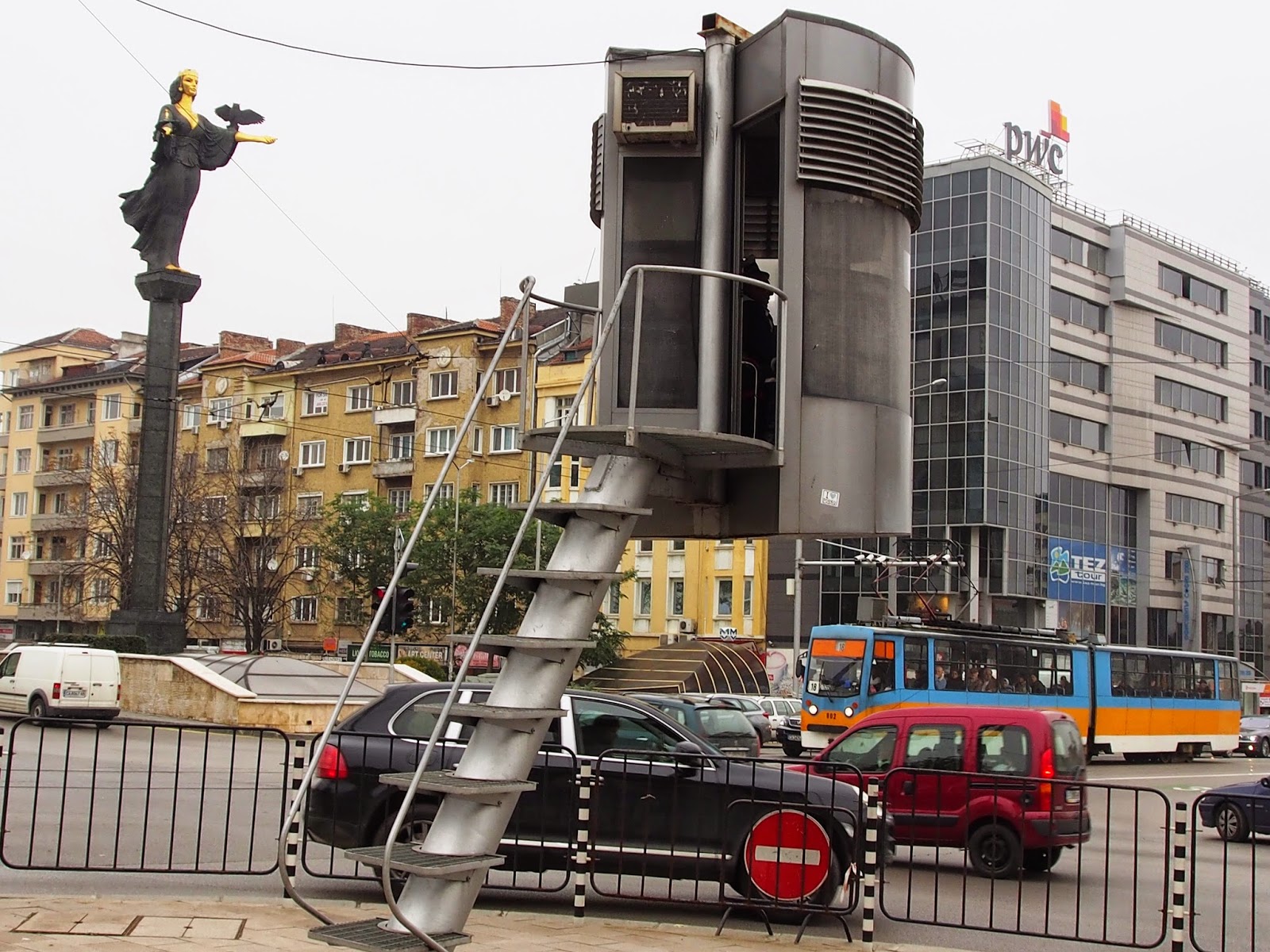 Look carefully and you will see a traffic controller in it. We were told that the controller actually intervened in the change of the traffic lights to ensure better traffic flows. Maybe our road transport department people should go there to take a look.

I have already – some years ago – read from somewhere that Muslims in Albania ate pork. But this is too sensitive for me to say it in our country. It is like telling Javanese that the founder of the Demak sultanate in the 16th century was in fact a Chinese (Radin Pateh; a Muslim though).


To me, it was perfect understandable. Albania was a Communist country, but strangely not a Soviet Union satellite. It had been a close ally of Maoist China for many years. Religions were swept largely underground, so even though Albanians are now free to practise Islam, pork and wine are no longer taboos to them.


Our tour guide Lito was not shy to disclose the fact that he is a pork-loving Muslim. He claims that pork is eaten by most Albanians, even though they are Muslim. He said he had to hide this truth from Muslim tourists though. He was candid enough to share with us a couple of anecdotes where he found himself totally lacking as a Muslim to his charge.


Tirana, which is the capital of Albania, still retains the “Soviet-era” ambience. We were quickly shooed away by a guard when we walked too near to a rather dull building purported that of the president’s. The monumental building designed by the ex-dictator’s daughter is still there, but in a state of total neglect. Surprisingly, we were told that she is now one of the richest individuals in the country!


Lito was proud to tell us that the accommodation that was afforded us was a five-star hotel. Apparently there were only two hotels with such classification in Tirana. In reality, it didn’t have much of a class; two of the three lifts were out of service. The lobby smelt of age. Even though we wanted to support tourism, there was hardly anything that can qualify as a representative “souvenir” from there.

But Albanians are a hardy lot. They formed substantial minorities in the adjacent countries. And I believe they are a very shrewd lot. The tour company that is taking us through the Balkans is actually owned by Albanians.
Posted by Yu-Book LIM at 8:31 PM No comments:

When our real estate acquaintance Leon old me that he was a Macedonian, I was quick to show off my understanding of his ancestral country.


“Oh, I have been to Greece once. I actually spent a couple of weeks there.”


He looked at me and said, “My mother-in-law would kill you if you say she is Greek!”


I was still trying to show off. “Isn’t Macedonians in Greece the same as the Macedonians in the new country that was once part of Yugoslavia?” I thought I knew the geography as well as the history of the area!


“They are totally different!” Unfortunately, Leon had to rush off somewhere and did not have the time to explain to me.


Until my recent visit to the Balkans…


And whose national hero is Alexander the Great? Both countries claim him to be theirs! Apparently he was from the ancient Kingdom of Macedon, which is now part of the Macedonian region of Greece. No Wonder!

A good lesson in geography and history. (I should have consulted Wikipedia instead of travelling across seven or eight time zones to learn this “fact”!


There is a tendency for less developed countries with big ego politicians to build monuments. Macedonia is a classic example. Our approach to Macedonia was by coach via Bulgaria. As we travelled closer to Skopje, sun was already setting. I thought I was in Indonesia. Both sides of the road were lined with unruly shop houses selling all sorts of wares in a very Third World-like fashion.

However, as we crossed the 15th Century Stone Bridge across the city’s Vardar River, I thought I was seeing Putrajaya! Statues after statues and new buildings of monumental proportions suddenly appeared before your eyes. I was told by the tour guide that the country is spending one quarter of its annual budget on these structures! Maybe they can recoup their investment from tourist dollars but I don’t seem to see that many there.

Apparently the city fathers want Skopje to look like London where double decker buses are iconic of the landscape. Even though it has its own coach building industry, it chose to buy them from China, at something like €300K a piece. They are certain not rockets. I suppose someone has made a great killing out of the contract. Hello China, this is one sure way of losing friends and influence in the long run!

A journey through the Balkans