To viewers in East and Southeast Asia, there is nothing unfamiliar about the following picture. Most people would be able to attribute it to the Shaolin's school of martial arts, especially if you are of Chinese descent.

The Shaolin school of martial arts has been around for about 1500 years. It encompasses discipline, perseverance, hardship, simplicity, humility and many virtues that are beyond most of us. Many of its gallant acts are legendary. I have visited one of its schools in Henan. You see kids clad in thin robes, some as young as five years old, practising - in rigid formations and under the watchful eyes of their seniors - Shaolin kungfu in the early hours of winter mornings. I actually felt for them. How could their parents allow them to endure such a training regime, I always ask myself.

And we sure love to watch when they show off their skills on stage!

But to the more conservatives minds in the West, the boys in the picture can look pretty intimidating – the skinheads, the bare shoulders, the peasant-type grey and earth-colour robes, and the bring-it-on gestures. They evoke glimpses of boxers during the dying days of the Manchu era in China, where foreigners were the principal targets. Would they want to send the children to learn Shaolin kungfu the way they send their children to Taekwondo or Karate schools in their neighbourhoods? 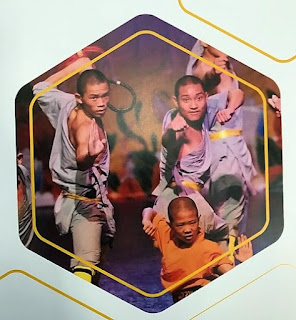 Maybe it is time for the masters of the Shaolin schools of martial arts should do a re-think. 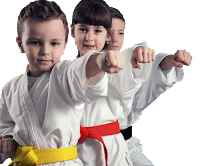 Why are Taekwondo and Karate schools doing seemingly so well in the West?

My two grandsons in Melbourne have been attending Taekwondo classes near their home even before they started school. Both are wearing black belt now. I used to take them to their classes - twice a week, and or three-quarters of an hour each session. The sessions were more for basic self-defence exercises than anything else. These martial arts schools or studios do have classes for those who want to pick up the more combative skills.

Everyone is happy and does not feel intimidated in any way.

To make Shaolin gain better acceptance outside East Asian communities, the first thing they should do is to do away with the "uniform" they are usually identified with, especially of the yellow colour variety. (The Yellow Peril fear!) The rest can follow.
Posted by Yu-Book LIM at 11:56 AM No comments: