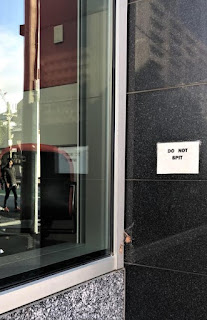 This picture was taken by my son-in-law who together with my daughter Monica visited Melbourne Law School recently. I hope you can read the line on the paper pasted on the wall.

Apparently, this was put up by the school’s administrators for obvious reasons. Melbourne Law School is one of the most prestigious law school in the world. Monica is an alumnus. It is now a professional graduate school, meaning, you must have an undergraduate degree to enroll.

Why did I say, “for obvious reasons”? If you visit the school now, you see Chinese students everywhere. Old habits die hard, spitting seems to be as natural as having to go to the loo.

I accompanied the founder of IMC Holdings Tan Sri Frank Tsao to visit one of the richest men in Malaysia in his hotel at Putrajaya. When we arrived, the traffic in front of the hotel was a little unruly. This tycoon, whom I happened to know since the early 1980s, when he was still up and coming, was well known for his hands-on approach. He immediately took control of the situation. He personally directed the flows to give our car a smooth. After this was done, he let go a spit right on the spot without any second thought. I must say I was taken aback.

He passed away recently, and on reflecting over this incident, I think I have reached a different understanding. He was not being crude or uncultured. I believe he was just expressing a sense of satisfaction with this act.

But that’s not the societal norm.

I remember I was a culprit of this form of crudeness or casualness as well. I was dining in a restaurant in Japan with a more worldly and refined colleague. I dropped some food on the floor and didn’t think much of it. He bent over and have it picked up. What else could I say. But from that day onwards, I would clean up everything I dirtied or messed up, including the stuff after a visit to fast foods or hawkers’ corners.

I had also never given any thought to hygiene when I shared meal with friends. We swam the dishes with our chopsticks.  It was just our “culture” of sharing. Nobody complained or bothered to enlighten us. It was not until I was dining with some acquaintances in Hong Kong in the 1990s when one politely facilitated me to use the pair of common chopsticks that was placed there then I realized his intention. Now whenever I have an opportunity, I would always try to bring this food sharing practice – as subtly as I can – to friends. Some did pick up instantly, but many remained oblivious no matter how hard I tried.

Back to the Melbourne Law School incident. My son-in-law was brought up in the old-fashioned way. Chinese Indonesians are more “Confucian” than most of us in traditions. He told me that when they were going into the lift, no Chinese students there bothered to give way to the elderly, let alone guests like him and Monica. Don’t the kindergartens and junior schools in China teach such basic Confucian or “li” or manners? And these are not peasants; they are studying in a highly regarded graduate law school!

My son-in-law’s anecdote reminds me of an incident I had in Greece during my recent tour with my wife there. In Athens, we had some on-your-own time. We decided to try the city’s metro. The train was pretty packed when it pulled up. We stepped in notwithstanding. On seeing me with a walking cane, an elderly gentleman immediately stood up to offer me his seat. How could I take up his offer? He needed it more than I! I politely declined but thank him, nonetheless. No sooner, several others also offer theirs. I accepted one of the younger passengers’ offer. That’s a civilized behaviour! And it has no correlation to the ancientness of one’s civilizational claim. This is just my opinion, though.

Melbourne, the most livable city in the world?

The Economist has consistently rated Melbourne as the most livable city in the world, so have a few other newspapers and lifestyle magazines. Is it for real?

In many respects, it is very livable. The CBD has many beautiful parks. It is quite easy to navigate in the city; the streets are in rectangular grid. (First timers can be intimidated by many of its hook turns, though.) Local motorists generally exhibit a very high standard of road etiquette. Many are happy to give way. People are quite helpful. You are even offered help unsolicited if you appear lost at the street junctions.
Most of its suburbs are also clean and orderly. Zoning and building heights are strictly controlled; you don’t see outlandish houses or commercial buildings. They usually have their own shopping precincts. Comprehensive shopping and hardware malls are within easy reach.

Melbourne also have some of the best universities in Australia. The University of Melbourne ranks among the top 30 or in the world. Monash is equally world-class. Many of its private schools are highly coveted by parents both local as well as overseas.

Melbourne is also well-known for its restaurants and coffee culture. The popularity of Victorian wines has also spread beyond Australia.

Even though Tullamarine Airport (Melbourne's main gateway airport) is not connected by trains to the city, it is one of the most efficient airports I have come across. There is no long taxing way to the gates, in-and-out is pretty swift. But be aware, Immigration and Quarantine can be difficult if you have issues with your visas or the food you are bringing in.

I am indeed happy to live in Australia, even though Winter can be a little too cold for someone who hails from the tropics like me.

Its trains are perhaps the most archaic in the First World. The same type of trains has been there for decades. Much of the service is above-ground. They cause havoc during peak hours at crossings. I took this picture a couple of days ago. We had to wait for three slow trains to pass. Previous governments, be it Liberal or Labor, just did not have the will power to eliminate these bottlenecks. Fortunately, it now has a premier that is prepared to do the difficult things. But Aussies being Aussies, there will always be objections – just because your view is affected by the proposed elevated crossing, or some frivolous reasons that you feel like championing. He bulldozes them through, nonetheless.

The trains themselves are not impressive in looks and comfort. The stations are the Wild-west type. And the fares are not cheap. It is a couple of times Singapore’s.

The trams have always been touted as an iconic feature of Melbourne. I think otherwise. They are monstrously inefficient, except during peak hours. They are huge and heavy and unlike their counterparts in Europe and elsewhere, they are designed to run at the outer part of roads. When one reaches a pick-up point, every vehicle behind it must mandatorily stopped to allow passengers to have safe passage. They build up long queues. It can be very frustrating if you follow one.

When my wife suggested that we signed up for a tour of Greece, I gladly agreed.

I have been to Greece, that was about 25 years ago, when I was stationed in Athens for about a month to help Genting bid for a casino licence. It decided to abort the pursuit; instead it went ahead to acquire two ships which led to the launching of The Star Cruises.

It was a fourteen day tour – first half by coach of Greece “mainland” and the other, by cruise of a number of islands, including a stopover in Turkey’s Kusadasi port, some Anatolia ruins of which my wife and I have visited before – when we did our Turkey tour some years ago.

We used a long way to go to Athens – by British Airways from Kuala Lumpur to Heathrow and Heathrow to Athens. It was a long journey. There are other airlines flying to Athens by shorter routes, but none offers Premium Economy class, which I need because of the condition of my injured left foot. Business Class was simply too expensive for us to consider.

The airport is pretty modern and efficient; I couldn’t remember how it looked 25 years ago. The people were quite friendly.

The tour was operated by Globus, which we signed up through Flight Centre in Melbourne. Organisation was superb. The tour director in the first leg was an elderly but elegant lady. We had a good teacher; she has an encyclopedic knowledge of the history of Greece. Little did I realise that Greek civilization was that sophisticated. I was especially impressed by what I saw in the artefacts during the Mycenaean Age (1600-1100 BCE). From what I saw, the civilization might actually be more advanced than China’s Shang which spanned around the same time (16th Century to 1046 BCE). No wonder, they were able to produce Socrates, Plato and Aristotle, not to mention great scientists like Pythagoras, Euclid, Archimedes and Hippocrates, and staged the first Olympics.

The revisit to Kusadasi’s Ephesus ruins reinforces my thoughts about Greeks and Greece. Kusadasi is a beach resort on Turkey’s western Aegean coast. The whole of Turkey was actually part of the Greek civilization. But the Byzantine Empire lost it to the Ottomans. Under the Ottoman onslaught, the whole Greece could have turned Islamic if not for Greeks’ fierce patriotism and their strong devotion to Orthodox Christianity. I see that the Greeks are generally a little laid-back in the way they go about their lives. I remember an experience with taxis during my last visit to Athens; none would want to pick up fares during lunch time. That’s siesta time for them! You can even notice the difference between the Greeks and the Turks in tourist sites. There isn’t much on offer in Greek spots, but on the Kusadasi stop, the Turks spare no efforts in emptying tourists of their dollars. One is spoilt for choice there.

Many parts of downtown Athens are still very un-First World. Unemployment is said to be 25%. Our cruise’s tour guide is a holder of a master’s degree in Mechanical Engineering. Many university graduates can only find employment in supermarkets and paid something like 3 to 4 Euros an hour. And unlike the malls and supermarkets you see in our part of the world, theirs are generally sparingly stocked. 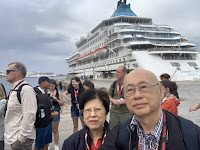 The sophistication of Greek Civilization.... 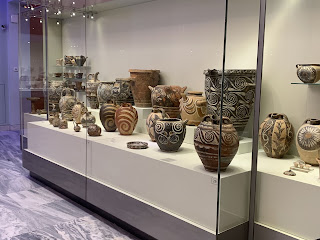 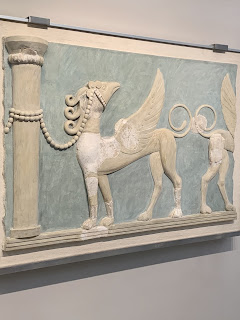 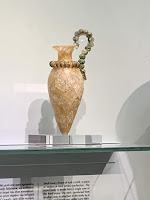 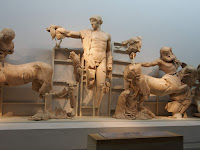 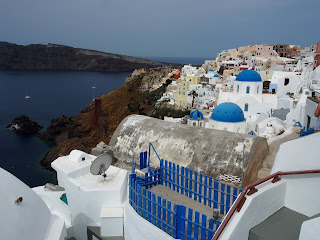 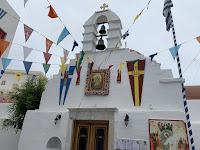 Greek's once upon a time... 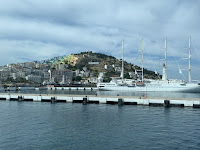 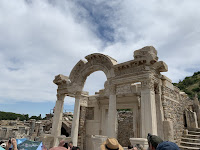 The pathetic parts of Athens today... 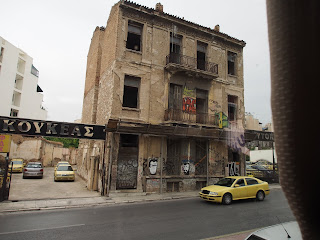 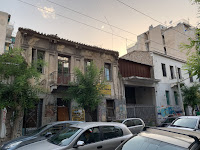 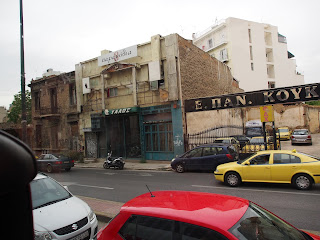