Because I still have to earn my keep, I have to travel to Singapore for meetings frequently. In between meeting, I usually swing over to Kuala Lumpur to park myself there. I keep a small pad at the Saujana resort. To-and-fro Singapore, Firefly is obviously most convenient for me. However, I also use the Singapore-Kuala Lumpur coach service that operates from the ground floor of the building where my Singapore office is. The coaches are clean and spacious and I can lay back to enjoy the smooth and scenic ride.


But there is something always dread about this coach journey: the Immigration and Customs check-point at Johor Bahru. It reminds me one of the first lessons I learned in Physics in Form Five: Newton's Law of Inertia. An object at rest stays at rest and an object in motion stays in motion with the same speed and in the same direction unless acted upon by an unbalanced force.

Year-in-and-year-out, you see the same mad rush, especially during weekends and holidays. Strangely, the authorities appear totally oblivious to the plight of travelers. The officers are certainly not derelict in their duty. You also don’t need a McKinsey to help solve the problem.


I suspect, like many things in Malaysia, everything boils down to this Law of Inertia! It stays in the same state because it has yet to be given a push by someone at the top!


And the someone at the top has not heard of MBWA – Managing by Walking About!


Or is there more to it than meets the eye? We Malaysians are damn good in Conspiracy Theories, aren’t we?
Posted by Yu-Book LIM at 6:29 PM No comments:

If I may describe what is the major weakness of some of the ‘monopolies’ in Malaysia, this is it! The following is my latest experience; I am sure it is not going to be the last either. People simply don’t take responsibility seriously!


Even though I call Melbourne ‘home’, I maintain a small apartment in Saujana Resort near Kuala Lumpur for me to go back to between meetings in Singapore. Thanks to the generosity of the Selangor State Government, I don’t have to pay for the water, since I consume less than the subsidised amount. Electricity is also not much, so is the gas bills, which I have to pay only minimum charge.


So when I received my February bill, I nearly fell out of my chair. It was more than RM3K! How can it be, when it has always been RM11? Just image, 300 times the normal. And I was only in town for a few days. There was also no gas leakage, lest I would have died from this volume of emission or diffusion! Something was definitely wrong; I sent GAS Malaysia a letter, together with all the bills for the previous months. The building manager Simon was also kind enough to give the supplier a call. A letter duly arrived; it was all apologies from GAS Malaysia. Oh sorry, we have made a mistake in the reading. It should have been 27 m3; not 270m3. Surprisingly, the English was also good. So my wife and I thought the anxiety was at last behind us.


Not yet!
Some neighbours wrote to ask if I had resolved the issue with GAS Malaysia. No sooner had I wrote to confirm yes than a surprise was waiting for me in my mailbox the following month. This time I was billed RM800 plus! I literally lost my cool. Simon was kind enough to follow up for me. A reply came through the same day. Our apologies; our system automatically made an estimate based on your last month’s bill. We will do a manual adjustment.


What? Nothing was done after your last mistake and apology!!! Come on, GAS Malaysia! Does your right hand not know what your left hand is doing???
Posted by Yu-Book LIM at 11:55 PM No comments:

My wife loves to watch Korean dramas. Many run into twenty or more episodes – in four or five discs. Somehow you can get the latest in Jakarta and my son-in-law will pick them up for a song when he is in town. Unfortunately, my wife does not know Korean and has to depend on English subtitles to understand. If the cover says it has both Chinese and English translations, you can bet with your bottom dollar that the English used is Google English. A chap with a family name “Kim” (金) is likely to be identified – variously – as “Gold”, or “Kim” or “Jing” or the likes in the same series. Han (韩), which is a pretty common Korean family name, will become “Korea”. Going to USA (美国) becomes going to "beautiful country or nation". A given name like 金河 (Jin-Her) will be translated as Gold River. All very hilarious and indeed pathetic to the core! If you opt for the Chinese version, be ready to hear “plastic” stuff – where voices sound so similar – no matter which character is speaking!


But if you buy the real Korean stuff; the English is perfect in every sense.
I couldn’t help relating this experience of mine in watching CCTVNews: The anchors are usually fine; but each time the camera rolls to scenes outside the studio, the English you hear can really hurt your eardrums! You don’t seem to get this with the Korean and the Japanese channels. I wrote to CCTV to suggest that they learn a lesson or two from them or Aljazeera. Guess what? I couldn’t even send through my message via the mailbox address provided in their link! 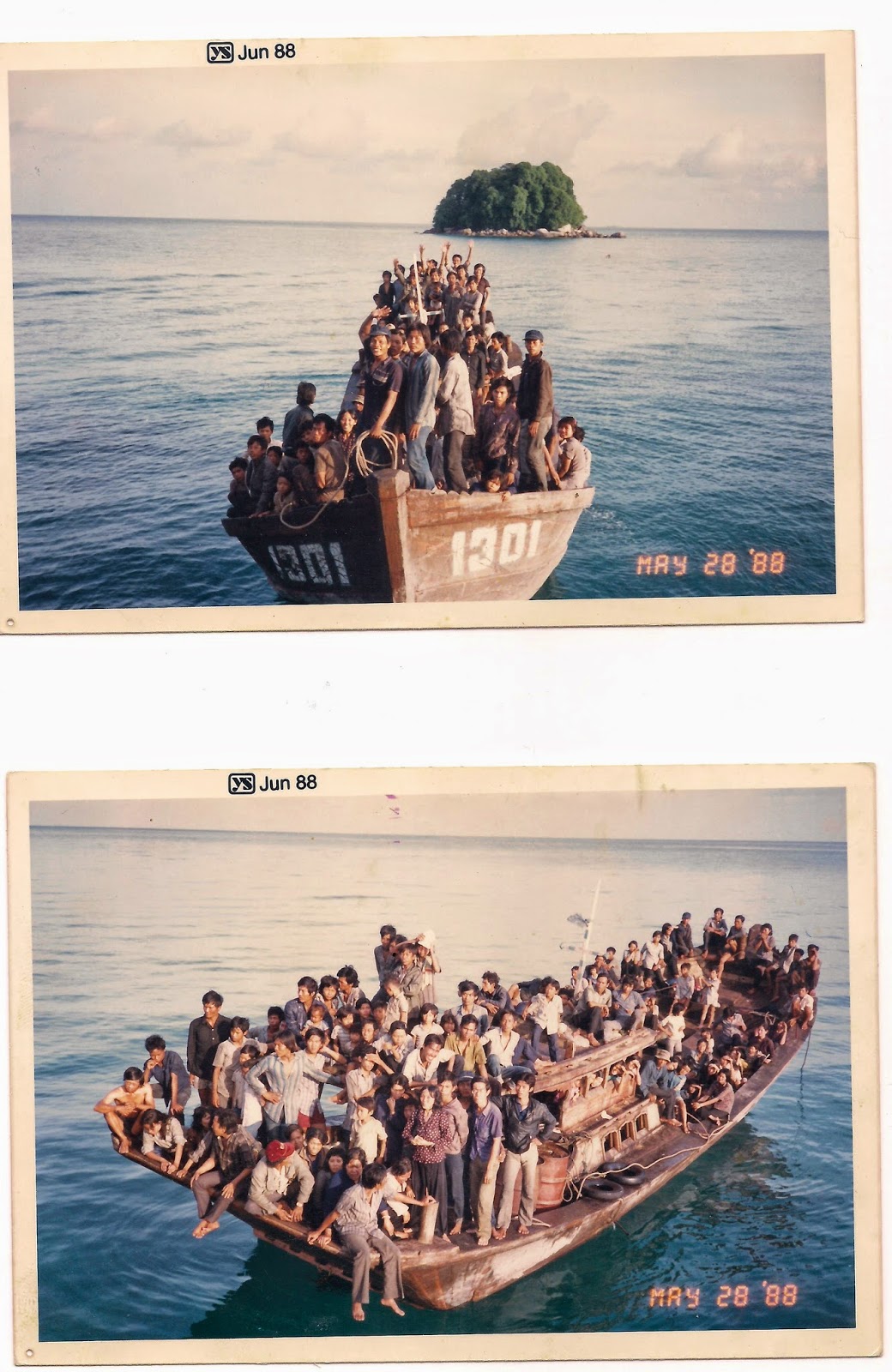 My wife was going through our old albums and she found these two old pictures. Who are these people? She asked.
They were taken in 1988 just after dawn somewhere at Kemaman, Terengganu, a Malaysian state facing the South China Sea. I was holidaying with some friends there and we decided to take a morning walk along one of the beaches. A boat appeared on the horizon and no sooner, it was before us. There were more than a hundred of them on the deck on alone. They must be the lucky lot; all appeared cheerful and healthy.
I have spoken to a few former boat people in Sydney and Melbourne. Many of them are doing well in Australia. Good on them!﻿