The Boss and his Trucks 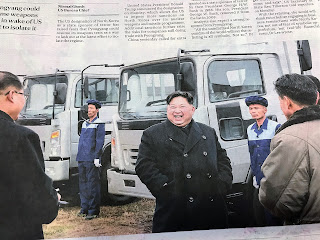 Something doesn't quite gel; North Korea is supposed to be dirt poor. The people there may be technologically brilliant - they can make nuclear bombs and rockets - but ability to come up with products that are commercially acceptable requires a different kettle of fish!

One  usually needs industrial clusters and economies of scale to make a product that will appeal to buyers. If you look at the trucks in the picture, the cabs do appear great in terms of aesthetics, far better than many of those that are being produced in China. However, we really do not know if these trucks are for real. We have to give the Boss the benefit of the doubt. They also have huge beasts when they show off their rocket arsenal. They certainly look solid; not the make-believe WMD variety Saddam Hussein used to claim.

You have to take your hat off to this young Boss. He has got good taste!

Robert Kuok has been a legend for many decades. Much has already been said about him, so when his autobiography was released a couple of weeks ago, I didn’t expect the book to be sold like a hot cake, especially in Singapore, where Robert Kuok is not really a household name, even though his two Shangri-la hotels in the island are a cut above most others in the same league. I was advised by Kinokuniya that I had to wait for the reprint.

In the meantime, I had to be content with the excerpts in the South China Morning Post that were being circulated by friends. Those parts on his advice to the then incoming prime minister of Malaysia Tun Hussein Onn and on his disappointment with the Malaysian government’s decision to see the existing shareholders’ equity diluted in MISC, as expected, did not go down well with many in the country. But I suspect these people have not really read the book.

The three copies I ordered finally arrived just before Christmas. It is not a great literary work, but you could hardly put it aside once you opened the first page. My wife, who normally does not enjoy reading autobiographies, especially by businessmen, also finished the book in one day!

Internationally, Kuok is held in awe as the world’s Sugar King. To me, Kuok’s name is synonymous with the Shangri-la chain of hotels. I have stayed in several of them – Kuala Lumpur, Penang, Singapore, Beijing, Jakarta and Yangon – and found my stay in every one of them comfortable. But I really do know something more about Kuoks besides the Shangri-la hotels. 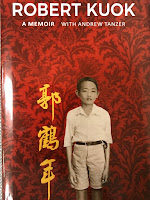 I was introduced to his brother-in-law Leslie Cheah in the 1980s, thanks to my good Highlands & Lowlands mentor Sayed Mohammad. I harboured fat hopes then that I would one day be introduced to Mr Kuok. It never happened. Years later, I had the opportunity to join Tan Sri Frank Tsao’s entourage to call on Malaysia’s VVVIPs in one of his usual Hari Raya rounds. (Readers of Kuok’s memoir would remember that it was Frank Tsao whom he approached to start the Malaysian International Shipping Corporation.) Kuok had his own entourage as well. Many of the destinations of the two tycoons were the same. We ended up in the same place and at the same time often. People of Kuok’s stature usually carry themselves with tunnel visions. But Kuok was different; would always make it a point to exchange a few pleasantries with lesser mortals and hangers-on like me. But before that, I had already heard a great deal about the greatness of this extraordinary man. I did have the opportunity to work for MISC for a few months in early 1990s. “Jepun” Ali, a colleague then, used to serve as MISC’s manager in Hong Kong. He said Kuok would always leave something for evrybody in business negotiations. In short, he does not believe in zero-sum games. That itself is a great lesson to teach in management schools' classes!

Kuok was quite blunt with those who seem to have short-changed or been mean to him. To those whose names were mentioned – the British bankers, the Australian charlatan, the Indonesian and Korean tycoons, and the Japanese corporate pretenders – he didn’t mince his words at all. Despite his harsh words about the atrocities committed by Japan during Word War II, and about colonialism, he is generous in his praises to those who have conduct themselves with principles. The book is all about fairness, humility, honour and above all, his concept and practice of filial piety.

Kuok must be one of the few who spurn honorifics. Many of his key staff are Tan Sris or Datuks. He might already be one, but he certainly does not want to be addressed as one.

Kuok is a no ordinary Chinese entrepreneur. He is really an exception.

Extraordinary lessons from an extraordinary man!
Posted by Yu-Book LIM at 10:53 PM No comments:

Bangkok, is your standard of care on the wane?

I got invited to attend a function - as an observer - in Bangkok last week. I decided only to show up during the first day of the do.

I took the last TG flight from Singapore to Bangkok. Departure was delayed by an hour because of the late arrival of the aircraft. It was a large plane, a Boeing 747.

After it landed, the plane taxied along in a snail-like manner. Never mind, maybe Thai pilots are a very careful lot.

No air-bridge was in sight when it came to a complete stop. We were ferried to the terminal on coaches! For a Boeing 747? And the aircraft was full? This must be crazy, I said to myself.

Along the way I spotted many air-bridges that were not serving any aircraft. Why?

* * * * *
The host was most thoughtful; I was attended to even before I cleared Immigration.

But the hotel was disappointing. The air-conditioning was freezing. Where is the thermostat? Never mind; I was too tired to look for it. (The next day, I found it located inconspicuously near the door!)

The meeting started promptly in the hotel's big meeting hall the next morning. I encountered my first frustration: Wifi came on only available intermittently!

I returned to my room after my part of the function was over. These were the things I saw; I leave the judgement to readers:

Montien Riverside Hotel is a fairly large hotel. I don't suppose it is a five-star property; but it certainly is not a budget hotel, since it had been chosen to house the organisation's guests, which are supposed to be High Officials from the ministries of education in Southeast Asian countries.

And I forgot to mention, the Wifi was also not working in the room!
Posted by Yu-Book LIM at 7:06 PM 1 comment: