This is Malaysia's Pagoh, not Germany!

I now go to Singapore sometimes as often as twice a month, each time for a week or so. In between meetings, I usually swung by Kuala Lumpur, since idling away in a hotel room in Singapore is a torture to me. Moreover, over in Malaysia, I have my own pad - a cosy apartment in Saujana Resort - and a toy car which I need to spin around a little from time to time to prevent battery failure.


I didn't feel like catching a flight today. There are two coach companies in the building where my principal's office is. I decided to try out First Coach.
The coach pulled out of its station punctually. Traffic at both the immigration checkpoints was a breeze. (Notwithstanding, some people were still trying to beat fellow travelers to the counters; very cheeena in behaviour indeed!)

The coach stopped at Pagoh's R&R lay-by for a twenty minute break. The modest eatery there was a pleasant surprise! The tables were spotlessly clean! No flies!!! The staff displayed the highest level of service etiquette and hygiene - the cutlery was dry and the food was pretty good. Peeping into the kitchen, I could see that the food-preparation staff even had had their gloves on! This eatery can put even the food courts in Singapore to shame! Chinese hawkers the world over should go there to learn the ABCs of public hygiene!


I did have a complaint, though - I asked for "Tea-O-kosong"; what was served had sugar in it. Sweet-toothness is still very much a part of us!

Another surprise: the young lady manning the counter at the mini-market could speak good English - not the Fellali variety you hear so often nowadays! Oh, I forgot to mention Pagoh is part of Muar, where I hail from. No wonder!

One Man's View of The World

Koreans have Mongols' DNA!
I learned something reading from LKY's One Man's View of the World. The Koreans have the Mongols' bloodline! I knew that part - Yuan generals and admirals were preparing an all out assault on Japan from the Korean Peninsula some time in the 1200s. It is generally believed in Japan that the country was saved by "divine" winds, but some recent researchers argue that Japan has to thank disgruntled Chinese for constructing sub-standard ships for the serviced of their new masters. It didn't occur to me that the Mongols also left their genes in Korea! (Interesting indeed but not surprising though; after all, one in eight in Central Asia can claim to be a descendant of the great khan!)

The Incredible Birds at Orchard Road!

I always wonder, why very few birds on the trees that line Singapore's Orchard Road soil the walkways below - where tens of thousands (70% Indonesians and 20% Filipinos?) throng every night? (Elsewhere, you are sure to be hit on the head. Yak, it is so slimy!) I can only surmise this, even the birds in Singapore listen to (or fear?) LKY.
Posted by Yu-Book LIM at 11:17 AM No comments:

Face of a crook 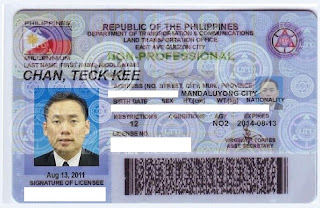 The silly me fell prey to a "robbed and stranded" message from Manila in my mailbox. Fearing for the well-being of my good friend Mr Chan Teck Kee and his family, I lost no time in sending AUD2K through Western Union to him. It didn't dawn upon me that this was a scam until the crook got too greedy. He emailed me for more the next morning. I thought I could recover the money from Western Union since there was no way someone could identify himself as Teck Kee to collect the money. The real Teck Kee was in Singapore all that time. There must be some collusion going on between Western Union's paying agent in Manila and the crook, so I thought. I promptly took the matter up with VCAT (Victorian Civil and Administrative Tribunal).

I lost the case; Western Union was able to show that the chap who collected the money did produce a bona fide photo ID!

Do take a good look at the face. This is the face that has been conning people everywhere!!! Apparently he is still very much up to his tricks in the Philippines. To my Filipino friends, do something to stop this non-Filipino looking crook from tarnishing the good name of your country!!!