From Cell Phones to Commercial Jets

I am a cheapskate when it comes to smartphones. In Melbourne, I signed up with Optus many years ago and since then have been given the opportunity to own the latest iPhone “FOC” each time I renew my contract.

iPhones are goldilocks to me; they are just right in everything. You don’t get unpleasant surprises.

But I spend quite a bit of time overseas. I am too lazy to keep changing SIM cards. I therefore equip myself with spare phones to house local SIMs. Alcatel sold by Australia Post was very affordable. It was very easy to use. But I soon I noticed that many SMS messages appeared only days later. That was bad; I decided to go slightly up-market and bought myself a Blackberry Z10 when I was in Singapore.

I used to be issued with BlackBerry in the mid-2000s. I could send and receive emails as long as there was signal. Typing was effortless. I could not do without it. But this Z10 was so different from the BlackBerry I knew. It must be the most “not-so-smart” smartphone in the market!

To perform a simple task, you have to swipe here and swipe there, all very confusing indeed! But what makes me hate the phone is this: for no reasons, its alarm would suddenly go off. (How would you feel, when it was 11:50pm, or 10 minutes before midnight, when it happened?) The reset was too complicated for me to handle. In the first place, who would make such a silly request? I definitely would not want to be woken up 10 minutes before midnight, would I?)

But I had to live with this silly BlackBerry when I was outside Australia.

Kaeden and Maxel recently followed us to spend this school break in Kuala Lumpur. Kaeden, who is now in Year 7, had been wanting to get a smartphone. He knew what he wanted; he chose a RM500 Oppo. I also asked my wife to get one, which she is finding WhatsApp useful. (Hitherto, she had been using a Samsung 2G phone, She said she only needed a simple phone to receive and make calls.)

I settled for a RM500 Lenovo model instead. What a mistake!

Both Oppo and Lenovo are made in China, but you can see a difference on closer look. The latter is like a Chery and the former, a Toyota. Lenovo is Chinese-owned; Oppo, I understand, is not. No wonder, notwithstanding the former’s IBM DNA!

With Oppo, the keypad is exact, whereas in the case of Lenovo, you need to have a strong finger to effect your command. The Lenovo homescreen is also too cheeena, at least in terms of colours. I should have listened to my grandson! 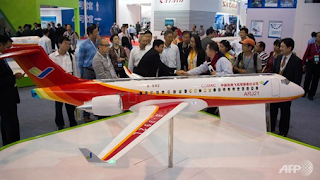 Just as I was still trying to make myself comfortable with my new Lenovo toy, I saw this Channel NewsAsia headline: Delayed take-off for China's own regional jet: China's homegrown ARJ21 jet has yet to fly any fare-paying passengers after initially scheduling its first commercial flight on Feb 28.

Was I surprised by the news?

Certainly not! Why? Because it is 100% Chinese!

China may have the Engineering “knowledge” to make Airbus 380, but it will still take many years before its ARJ21s are confidently used by non-Chinese airlines. China simply does not have the right quality, safety and taste culture ingrained in its society to make the likes of Boeing, Rolex, Mercedes, and what-have-you YET!

I hate to say this (and many of my friends will "kill" me for it too!): In respect of quality, safety and taste, Chinese still have a great deal to learn from their arch rival (or enemy). You know who they are, don't you?
Posted by Yu-Book LIM at 11:23 AM No comments:

All These Dumb Developers!!!

There are many dumb developers in the Klang Valley. I don't have to leave my apartment far to spot them. The couple of them within walking distance more than qualify to receive my medal of ridicule.

Citta Mall is one of the first among them. Malaysian weather is so hot and humid, the complex is not air-conditioned, yet the place has not been designed for air flows. No wonder it is still more than half empty even though it has been around for many years already. The developer also doesn’t seem to understand the word “catchment”. It is not pedestrian friendly to the residents nearby, who are basically their market. The surroundings are full of potholes, wild grasses and dangerous culverts. The tunnel at the Ara Damansara-Saujana Resort looks like a dungeon. One with common sense would have caused the authority to clean up the place for it to stream visitors through. Someone told me that it is owned by Lee Ka Shing; can you believe that?

The new addition is Nova Saujana. The condominium looks impressive enough. Its ground level houses Hero Supermarket and a Chinese restaurant. There are still a few shoplots waiting to be tenanted. But OMG, how do you go there? The developer must be some kind of armchair entrepreneur. Or have they just depended on their more dumb planners and architects to tell them what to build?

The Saujana Resort or Ara Damansara precincts are their logical market catchment. But I won't risk my life to walk there. Sure, one can always drive there, but the one kilometre journey might take you more than half-an-hour, thanks to the gridlock traffic condition that you often see along this stretch of Subang airport road! Bodoh, really!

And a little down the road is Hijauan Saujana, a massive apartment complex which has just been completed. The only way in-and-out of the complex is through a dual carriage but single lane underpass that leads to the only thoroughfare in Suajana Resort. Can’t imagine the situation when the units are more taken up.

A little further is ‘Evolve”. It is still thinly occupied. Let’s wait until it is more occupied to see how it is going to screw up the narrow road that serves such a development! No wonder it is named ‘Evolve’!

But the ‘dumbest of all the dumbs’ honour should go to the mighty Sime Darby. Its Ara Damansara township offers the best ‘How Not To Build’ lesson in property development. Roads have been badly planned and you have pockets of commercial blocks here and there. Most have ended up as automotive service shops! And rubbish are piling up everywhere.

Maybe these developers did not have to use their own money. The money must have come easy from their “Ah Kongs”.
Posted by Yu-Book LIM at 6:18 PM 1 comment: