Ceremonial boat sets record…
People love to set records – longest, biggest, tallest and other what-have-you superlatives. How about “biggest lie” or “loudest fart”? I am pretty sure many of the political leaders in our beloved country would win these records hands-down. And the runners-up will not be far behind.
And what about silliest, dumbest, craziest, stupidest? Surely Guinness can also offer some form of records to make some of the fame seekers happy.
When The Star reported a couple days ago that the devotees of the Nine Emperors God in a town in Kedah had built a ceremonial boat and they were touting it to be the largest in Malaysia, the first thought that came to my mind is that how could they do this to their great deity! 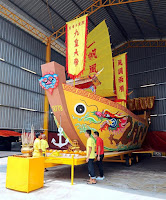 It is a junk, no matter how big the boat is!

China already has an aircraft carrier; it is believed to be building more. Why are these people still building a junk for the Nine Emperors God. Surely, the great deity doesn't want, or indeed need, to be propelled by monsoonal winds to go places! The great deity certainly deserves a flag ship hat befits his status. If it is not an aircraft carrier, than it has to be at least a cruiser!

Each time I turned up to join my siblings to pay respect to our forebears’ graves during Qin-ming or All Souls Day, I could see people burning paper houses, cars, credit cards, the latest smart phones and even passports. How filial these people are!

Hopefully, traffic jams in the netherworld are not as bad as ours here. And I just wonder whether if it is wise for all these filial souls to give their long departed loved ones credit cards. Debt is the last thing you want them to incur in the other world - unless, of course, you burn sufficient paper money each month to take of it. With the amount of paper gold and silver and "Hell" money you see burnt in every of these occasions, inflation there must be pretty bad. And why burn "Hell" money, when your loved ones may actually be in nirvana, or heaven, or paradise now?.

Many of these practices are said to be the legacy of Daoism (or Taoism). I do read Lao-tze and his teachings from time to time. I always think he is the greatest philosopher China has ever produced. But in nowhere did I see Lao-tze propagate these superstitions.

Maybe I am kurang ajar - just how my late father thought I always had been when I was young! And still am! 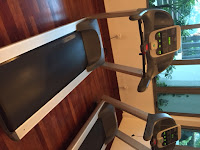 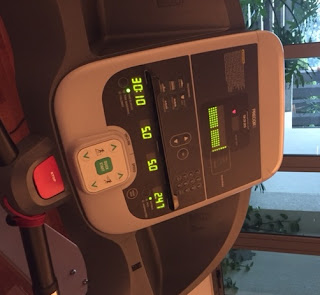 Despite my many attempts to turn the pictures 90 degrees anti-clockwise, they remain in this silly orientation. So much about Google's Blogger capability! I suppose you have to tilt your head 90 degree clock-wise to figure our I am trying to show then. It is the treadmill in my condo!

I hate treadmills! My wife loves them, but she is happy to oblige me by going with me for long walks around our neighbourhoods (Toorak in Melbourne and Saujana Resort in Subang) in the morning and evening instead. She is more disciplined; I always pray for rain!

We usually return to Malaysia for extended stay during two periods, when we don't have to play taxi drivers to our two grand-kids in Melbourne. The last quarter of the year is one of these windows. But this time the haze is simply impossible in the Klang Valley. It has been weeks, yet you don't see any sign of abatement. I suppose Malaysians and Singaporeans have just had to deal with an apathetic Indonesia. President Jokowi says he needs three years to fix the problem. I thought the problem had been recurring almost every year; it was only a question of the degree of the denseness of the haze we were seeing. I bet in another month's time, when the burning and smoldering is over, everything will be forgotten again. I am pretty sure if their kneah-su style, Singapore would already have figured out how much the latest bout of non-stop haze had, or would, cost their economy and the impact on health there. Many of us in Malaysia of course have the usual syiok-sendiri mentality and are content to brush this more-or-less yearly occurrence off as a "what-to-do" nuisance.

I had great admiration for Jokowi - until he had shown himself to be another Obama! Both were refreshingly solid in many ways before they got elected. Unfortunately, they just couldn't manage bureaucratic and institutional inertia and resistance or persistent opposition onslaught once they found themselves sitting behind their huge presidential desks! Obviously the neo-Conservative forces in the States are simply too formidable for Obama to tackle. As for Jokowi, it is the country's civil service, which is largely filled by zombies and self-serving bureaucrats, and the inept newbies in his cabinet that are giving him the strong head wind.

We can criticize others, but what about our own country? Our political and economic landscape is also being clouded - by a haze of a different kind, though. All of us know what it is; but how many of us are brave enough to speak out? Before I stray farther afield and end up as a hunted, I better return to what I want to say about treadmills.

With such a high reading of haze around, I have no choice but to count on the treadmills in my condo. But I dread using the treadmills!

I bought a treadmill in the 1980s; it was made in Taiwan and not as sophisticated as the one shown in the pictures. I could count the number of times I used it with the fingers of my two hands. I soon decided to get rid of it - for a simple reason: I just couldn't bring myself to tread on it for more than 10 minutes each time! We gave it to Bee, our sister-in-law.

Many can deal with monotony but me 1,800 seconds each time, since that's the minimum my wife says I have to do each time? Very torturing, lah! To kill time with the count-down or the count-up - depending on setting - can make me go crazy!

Don't the manufacturers of treadmills know this boredom issue, especially with older people like me?

I have a suggestion for them: All they have to do is to provide a well-positioned pocket on the panel of their treadmills to hold an iPad. This will allow me to kill time with BBC, CNN, Malaysiakini, the Malaysian Insider, and what have you. As for my wife, she can continue to enjoy her Korean dramas even in the gym.

And I don't have to pray for the rain to fall!