Facebook is addictive; many would unconsciously go to its pages the moment one’s smartphone is turned on.

I suppose all of us are just curious to see what our friends are doing!

But to see a 70-year-old man’s latest profile photo – if he does it one time too often?

Certainly not your cup of tea, right?

I just couldn’t hold back when this 70-year-old friend of mine posted his latest – a picture of himself with a cowboy hat and some hippie-type flowers in the background. “Hello, so-and-so; the photo does not look good on you. You look like a Bollywood star.” He didn’t take the hint and prompted posted a new one!

A woman friend is no longer a Sweet Young Thing that she might have once been long long time ago. But just the same, you see a new profile each time you scroll down your Facebook pages. I wonder what does her husband think!

Another friend is a keen hasher. He uploads tons of his cross-country run photos, many with Sweet Young Things in them. You really cannot tell the difference between those he posted months ago and those that he has just uploaded. This friend also posts pictures he takes during those social events and festive celebrations he attends, again tons of them, but not one with or of his wife in them. Strange man, really. Ditto the sun-rise pictures of the beaches near he now lives.

And a few would post pictures of the food they had in whatever eatery they happened to be patronizing. You can understand if the food is something special; but many of those shown are in fact of the char-kwe-teow type varieties, which you can find in every corner of food courts in East and Southeast Asia.

I do appreciate friends’ sharing of their special occasions, or meeting up with old lost-lost pals, or the things they saw or experienced during their recent tours, or their alerts on products, happenings and new knowledge, etc. But certainly not of the aforesaid nature.

Be that as it may, I really shouldn’t be so opinionated. Maybe this is a way to keep us mentally active?
Posted by Yu-Book LIM at 6:02 PM 6 comments:

Be warned of this conman: Purva Pius

I posted something on Sarawak’s head hunter a long time ago and until today, I still keep receiving this type of scam messages asking me to contact a certain Dr Purva Pius. He is certainly a bloody con-man trying to lure unsuspecting people to respond. The name Sharon Sim is just being used as a convenient bait. Invocation of GOD must also be thought to be a powerful weapon for this Purva Pius conman. Be warned of this conman, friends!

This is the message that keeps coming to me:

Hello Everybody,
My name is Mrs Sharon Sim. I live in Singapore and i am a happy woman today? and i told my self that any lender that rescue my family from our poor situation, i will refer any person that is looking for loan to him, he gave me happiness to me and my family, i was in need of a loan of S$250,000.00 to start my life all over as i am a single mother with 3 kids I met this honest and GOD fearing man loan lender that help me with a loan of S$250,000.00 SG. Dollar, he is a GOD fearing man, if you are in need of loan and you will pay back the loan please contact him tell him that is Mrs Sharon, that refer you to him. contact Dr Purva Pius,via email:(urgentloan22@gmail.com) Thank you.

A Book on Nantah (Nanyang University) 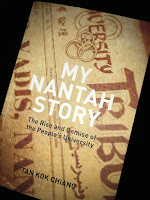 I picked up this book because one of my older brothers, like the author, also graduated from Nantah – the endearing name for Nanyang University. Also like the author, my brother went on to become a somebody, in spite of the prestige, or the lack of it, of this alma mater of theirs.

Immediately upon his graduation, my brother was denied re-entry to Singapore. I know my brother was not politically active; how did he earned the wrath of the government was totally beyond him. I suppose the paranoia was for real then; every shadow was a ghost. He had to start his career on a low base, whereas graduates from recognized universities, like me, were considerably higher. But his perseverance paid off; he soon shot past me and went on to achieve great heights in the business world.

The book is very well written, and packed with facts to back up the author’s contentions. However, I couldn’t help sensing that the author was still angry when he wrote this book. His biases, despite his claim to the contrary, are evident all over the book. There were many villains in his Nantah story, but the one that surprises me most is Prof Wang Gungwu – someone whom I admire greatly for his great scholarship. I think Prof Wang has been painted quite unfairly. His recommendations were made in the reality of the time – when Singapore was already embarking on a journey of no return, as far as Chinese schools were concerned. But the book did draw out the Machiavellian nature of many. Hope they can sleep well after reading the book.
Posted by Yu-Book LIM at 7:35 PM 6 comments:

If there is any fault I could find with my eldest brother, who passed away a year ago, it was his overly solicitous love towards his siblings, nephews and nieces. He would stand up to offer his seat each time we ran into him, regardless of situation. I would always tell him, “Ko (older brother), don’t do it; you are an elder!) I am a bit of a Confucianist; we give way to elders, not the other way around! But despite repeated reminders, he would still do the same. I suppose habits are hard to change. He was well loved by all of us; we still miss him dearly.

I got reconnected with a long-lost friend, thanks to WhatsApp. He has no pretensions. I like his care-free nature. But as I began to see his exhibiting the same solicitous tendency, I felt disappointed. His stock took a deep dive in my prejudiced mind.

I always believe at our age, we need to conduct ourselves with dignity. We are naturally concerned about our friends’ well-being. But we shouldn’t make our friend uncomfortable for our being too intruding!

When my nephews and nieces and, for that matter, younger colleagues, called us “you guys”, I would at the first opportune time advise them not to drop that habit, which I suppose is pretty “standard” amongst millennials.

Many a time, I see old couples arguing over trivia incessantly. Aren’t there no better things to talk to each other? My wife understands me perfectly. No waste time on issues that are irrelevant.

When you want to propose something in a gathering to discuss serious matters, make sure you have thought through it, lest you lose respect. You can offer opposing views, but there should be lessons or wisdom in your postulations. And if an opinion has already been rejected and explanation given, do not try to bring it up again. Friends will lose their patience with you in no time.

This bags another advice: Don’t stop learning and reading! Many friends have regressed intellectually; as they age, they don’t bother to read any more! If you don’t read, you don’t learn. Learning is a life-long task or exercise that keeps us mentally healthy. Devoid of it, you soon become infantile in your reasoning and worldviews. Wonder why many of us are accepting fake news and internet rubbish without questions? We simply have lost our ability to discern!

As we age, let’s try not to dress sloppily or appear disheveled too. I am sure your spouse and your children will feel good if you carry yourself well.

Revamp of one's head, not facilities...

My attention was drawn to a news article in Singapore's Straits Times. It reads: KL airport to undergo ‘total revamp’ to stem drop in rankings.

The managing director of Malaysian Airport Holdings Berhad, which operates the airport, was quoting as saying that work on a total revamp of passenger facilities at the Kuala Lumpur International Airport is necessary to stem its rapid drop in international rankings.

I am aghast with your proposed approach to solving this problem, Mr Managing Director!

Of course, all new brooms sweep clean. But under your watch you have allowed the floor to accumulate dirt. No sooner, the floor would be dirty again. Another new broom?

The facilities at KLIA 1 are actually at par with the best in the world, even compared to the much touted World No 1, the Changi Airport. But unlike Changi Airport, many things are not quite right in KLIA under the carpet.

The toilets and the trains between the main and satellite terminals are just the more visible symptoms. Ditto the ages that we have to wait for your baggage to come out of the carousel after your arrival. And don't count on those priority tags!

Mr Managing Director, the problem with KLIA is with your maintenance culture, or the lack of it, and, likely, also the attitude of your managers and supervisors.

I shuttle between Melbourne and Singapore. I fly Malaysia Airlines because its business class is cheaper compared to Singapore Airlines or Qantas. Also, since I am usually not in a hurry, a stopover in KLIA allows me to relax in MAS's very friendly lounges there. But the last two trips have made me change my mind about MAS and the management of KLIA! More about my unpleasant experience with MAS later; let me talk about KLIA first.

During my last September trip, the connecting flight from Kuala Lumpur arrived late, and I had to sprint to the  boarding gate upon my arrival at KLIA. If not for my Business Class ticket, I would have missed the flight.  But I had to content flying without the luggage which I had already checked in the Singapore end. I was told that flight control was the problem in KLIA, hence the late arrival of the aircraft. The same happened for my trip last month - non arrival of the "connecting"flight from Kuala Lumpur, again,  something to do with flight control there. MAS had to book us on SQ to fly direct to Melbourne. I heard it is also the same problem: something to do with flight controls KLIA. Where is the economics if they have to do this?

To play safe, MAS usually offers a fairly long connecting time at KLIA for my Melbourne to Singapore journey. MAS’s flights out of Melbourne are usually punctual. If I travel Singapore Airlines, they would be able to put me in an earlier flight, but not MAS. Why, apparently, KLIA is not able to do it!

You don’t need to be a McKinsey genius to see what can be done for KLIA 1 and KLIA 2. All that the Mr Managing Director needs is to do is to walk around more often and maybe fly out to Singapore and Hong Kong from time to time to see what these airports are doing. There is no point going to Kennedy, or Heathrow or Charles de Gaulle; they are not great places to learn, really. But maybe it is not politically correct to learn from fellow Asians?

KLIA needs a total revamp, not on its facilities, but of the mindset of its top bosses like this Mr Managing Director.
Posted by Yu-Book LIM at 2:45 PM 3 comments: